The Story Behind Thunder From Heaven - Anacortes Magazine - Art, Music, and Community

The Story Behind Thunder From Heaven

I was born in 1994, my generation has in some ways been swept away from the understanding and horrendous outcome of the Second World War by games like Call of Duty, war movies filled with cool explosions and big time Hollywood actors. I, along with friends of mine, were fascinated by the awesome tanks, fast airplanes, killer weaponry, and saw WWII as some great thing. The good guys won, and the bad guys lost. Seeing WWII veterans as elderly gentlemen who walked down the streets of Anacortes during the 4th of July Parades with a chest full of medals in their old service dress uniforms. We overlooked one thing, something that was not covered in history class. While history’s darkest chapter ended in 1945, you realize that those veterans were our age. 18, 19, 20, 21 years old. Those men fought as brothers in arms, willing to sacrifice their lives not only for their country, but for each other. Saving Private Ryan depicted this when a dying Captain Miller, played by Tom Hanks, says “James. Earn this. Earn it”, to Private James Ryan (Matt Damon) who’s earned a ticket home when the war department discovers his three brothers have died. A small band of US Army Rangers led by Tom Hanks are ordered to bring Ryan back so his mother wouldn’t put a fourth gold star on her window.

The idea that the mission to risk the lives of 8 men to save one is almost absurd if you think in terms of military strategy. When the line “Earn this” is delivered to Private Ryan, Captain Miller is essentially saying that these men died for you. Live a happy and prosper life, earn what happened today. Of the squad assembled at the beginning of the film, only two survived the end. Six men, plus a handful of men from Ryan’s outfit died to save his life at the conclusion. They were our age. Late teens, early twenties. Fighting to repel tyranny and oppression so that future generations wouldn’t have to, and that’s why we’re free. They deserve thank yous, they deserve parades, memorials but most importantly they deserve our thank you. 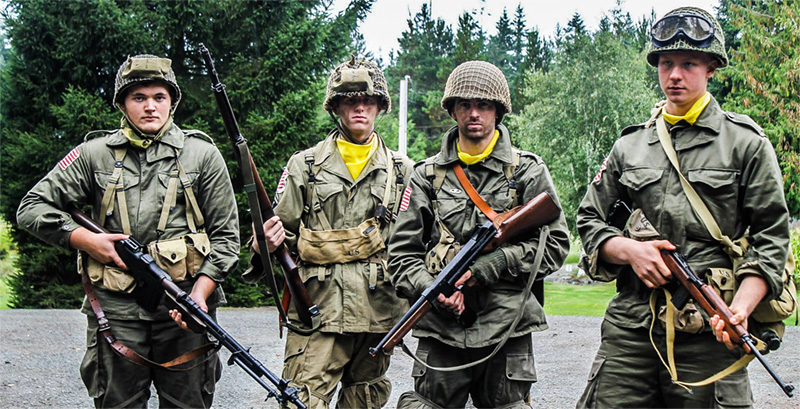 My friends and I wanted to display our thank you through a depiction of the U.S. Combat Infantryman, defying all fears and thoughts that tell them to run; they stood and fought wherever they were. The historical background for our film; U.S. Paratroopers of the 17th Airborne Division embarking on the last major battle of the Western Front on March 24th, 1945, Operation Varsity. After the Battle of the Bulge in the winter of 1944, the German Army had suffered heavy casualties that forced many units to retreat across the Rhine River and back into Germany. The last major obstacle for the Allies on the Western Front was the Rhine River, if they could cross it they’d be into Germany. Ultimately, it would only be a matter of time if a Rhine crossing was successful. British Field Marshall Bernard Montgomery devised a plan to breach the stalemate, with an amphibious and airborne assault.

Two operations would take place, the first was codenamed: Plunder. American and British Forces would cross the Rhine by boat, seizing key towns and bridges on the Eastern Bank. The second, Varsity was an airborne daylight drop. Two divisions were used, the British 6th Airborne and the American 17th Airborne. It would be the 17th’s first airborne assault of the war; it would also be the largest in all of military history. The objective of the paratroopers was to capture key sectors, and eliminate any opposition trying to repel the troops crossing the River. The 17th would lose 900 men on the first day. By the end of the operation on March 29th, over 1,300 men would either be killed or wounded.

People who reflect upon Operation Varsity often wonder, “Was it worth it?” In the context of ending the war soon as Germany surrendered on May 8th, 1945, then yes it was worth. In the amount of American, British and Canadians killed in the last few months of the war? Absolutely not. The title “Thunder From Heaven” comes from the motto of the 17th Airborne Division, prior to Varsity they’d only seen 35 days of combat. Unfortunately, those 35 days were in the bloodiest battle for the American Forces in Europe. During the Battle of the Bulge, the 17th lost 1,000 men. And with such devastating losses, the 17th would be taking part in another mission that would cost the lives of another 1,000 more. Operation Varsity. We decided as a cast & crew to depict the men of the 17th Airborne Division and honor their history, something that has yet to be done in film work. And that is the story of how we decided to develop “Thunder From Heaven.” Watch the Trailer for Thunder From Heaven

The film will be released on Veterans Day 11/11/13 on Facebook, Youtube, Vimeo, and Google Video. Studio 1010 will host a public showing. Check back on Facebook for the date and time.

ABOUT THE AUTHOR
Mitchell Babarovich
"One must climb a hill to reach their goal, there may be obstacles making it difficult to ascend. But when you reach the top and look down, you'll see that you were supported by those you love, and those that love you every step of the way. An extraordinary feat accomplished by an ordinary human being will always be deservingly rewarded. Never give up, never back down from pursuing your goals and capturing your dreams."
What are your thoughts on this article?