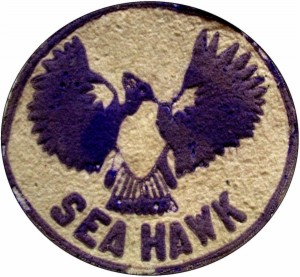 The Mayor of Anacortes, Laurie Gere, will proclaim Anacortes “Home of the Original Seahawks” on February 2, 2015, ninety years to the week from when the students of Anacortes High School claimed the name for their sports teams. It will also be the day after that NFL team from just south of here wins another Super Bowl; those Seahawks took up the name in 1975.

With virtually every northwest news story stressing some connection to those Seahawks, it was inevitable that the television cameras would turn north to Anacortes, where it all started. A KING-5 crew came to town on January 16th to cover the story at the Anacortes Museum and at the basketball game between the Anacortes Seahawks and the Blaine Borderites. At this point, no one in Anacortes has made anything but a historical claim to the name, unlike the “12th Man” trademark tug-o-war. Along with Mayor Gere’s proclamation there is an ongoing effort for more public awareness and Anacortes pride.

Leading the charge for this has been Eric Sundblad, an A.H.S. alum who resides deep in the “Cub Country” of Sedro-Woolley and is often reminded of it by roadside signs. “Why doesn’t Anacortes have Seahawk signs marking their turf,” he asked himself. Beyond that, he had a theory that Anacortes might be able to lay claim to being the original Seahawks, an idea he brought to the Anacortes Museum as a research request in 2013.

The term “Seahawk” arose as a nickname from both avian and literary sources. Strictly speaking, there’s no such bird, in zoological terms. The Osprey (Pandion haliaetus) is “also known as” Seahawk and Fish Eagle because its talons are uniquely adapted to catching and carrying fish — making it the ideal mascot for a fishing town like Anacortes. For A.H.S. students, initially “Seahawk” had less to do with birds than with cinematic pirates; meanwhile real fish pirates and rum-runners were active in the local waters before, during and after the Prohibition era.