Bringing the Island to Justin A memorial service was held in Georgia on April 30th. On Justin’s birthday, his family will come to the island for another memorial service and to bury his ashes, next to his beloved Alice, who died of lymphoma in 2011. The Celebration of Life will be held at 1:30 p.m. on Saturday, July 6, at the Guemes Island Community Center. Justin died peacefully on April 27, surrounded by his family. On April 20, he was able to fulfill his lifelong dream of having his art exhibited. He was well enough to attend the opening of his show in Atlanta, and he raised $1,000 for his charity fund. His aunt describes him as being “on cloud nine.” Another exhibit is scheduled for August.

Donations may be made to the Leukemia and Lymphoma Society. At some time this site will also have T-shirts and prints of Justin’s art available, the proceeds from which will go to the fund.

The Guemes Island Fire Department is also putting together a team from Skagit County that will participate in next year’s Columbia Tower Stair Climb, a renowned event that raises money for the Leukemia and Lymphoma Society. They will be taking pledges for next year’s March event. In 2008, 25-year-old Justin James decided to leave his native Georgia to explore another part of the country. Justin, his German shepherd puppy, Alice, and a friend from Arkansas drove nonstop to arrive in Anacortes in time to volunteer at the What the Heck Fest in July. Justin knew about Anacortes’s artist-run community at the Department of Safety and wanted to participate there. When he tired of dormitory-style living, someone suggested that he check out Guemes Island.

He loved it there and spent the rest of the summer living with Alice in a tree house in exchange for landscaping work on the tree-house owners’ property. He became fully immersed in island life during the next three years, volunteering for seemingly everything. He joined the Guemes Island Historical Society, the Men’s Breakfast, and was an active volunteer for the Guemes Island Library. He became a volunteer firefighter with the Guemes Island Fire Department and completed the rigorous training at the Skagit County Fire Training Academy. He was a founding member of the island’s monthly newspaper, The Guemes Tide.

In 2011, Justin returned to Georgia to take a job. While there, he was diagnosed with non-Hodgkin’s lymphoma. After going through extensive treatment, Justin, now 29, is losing his battle with cancer. He had very much wanted to return to the island with his family for one last visit. Unfortunately, his health is declining rapidly and he is not strong enough to make such a long trip.

In an effort to bring the island to Justin, friends organized an all-island photograph on March 23, on the lawn in front of Anderson’s General Store. At least 160 people, 13 dogs, and 1 horse showed up for the photo. Four people sent full-size head shots that were held up on sticks. Islanders outlined a large heart on the lawn, and photographers Ken Davenport and Chris Terrell from How It Works donated their time to take and print the photo. Jordan Yeager, a junior at Anacortes High School in the Digital Media Program, volunteered to film the event. 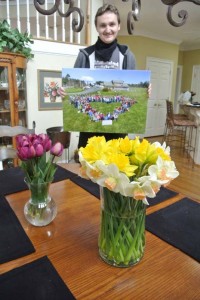 On April 2, an emissary from the island flew to Georgia to hand-deliver an 18 by 24″ enlargement of the all-island photo to Justin, along with 150 field-cut daffodils, 30 field-cut tulips, apple cider and pie filling from an island orchard, and the smoked salmon and stinging nettles Justin had specifically requested, plus cards, letters, and gifts that islanders sent along.

For four days, the island was brought to Georgia. Family streamed in to see the photo, which always elicited stunned, astonished, and amazed silence, and then tears. Even the Hospice nurse cried, and then said, “I want to live THERE!” The days were filled with love and joy and laughter.

Justin helped make huge quantities of nettle soup and nettle pesto to share with his family (and freeze for later). His dad loved the dishes so much he got online the next day and ordered live nettle plants sent straight to Georgia so he could start his own nettle patch, ignoring the ribbing about the comparison to Northwesterners ordering kudzu.

Courtesy of an island family, takeout BBQ was ordered for the whole family one night from one of the top BBQ places in Atlanta. Lots more joy, laughing, and finger-licking.

“WOW! How do I begin to thank you and the island for the best week Justin has had in a long time,” his stepmother wrote, following the visit. “His spirits were lifted so high and he loved all the gifts everyone sent. Jordan is a special person and I do hope she wins for the wonderful video she shot.
… I am so glad Justin had the experience of meeting so many wonderful people. He is very special and does seem to touch many lives in many ways. Please tell everyone on the island how much love he felt.”

Justin is currently preparing an art exhibit that will open in Atlanta on April 20. See his profile here. Proceeds from his work will go to his fund for lymphoma research.

On the day of the photo, one islander commented that it was great to have an opportunity to give such a gift where all you had to do was “show up.” Justin’s gift to the island was all the “showing up” and helping out that he contributed while he lived there. In his time of need, the island “showed up” for him, in the best way that counts—with love.

ABOUT THE AUTHOR
Edith Walden
Editor-in-Chief and lead reporter for The Guemes Tide.
What are your thoughts on this article?

today….A 6 year old girl in our community named Madelyn Kuhnlein has been battling cancer for two years. On Friday February 1st she had her last chemo treatment….today… a parade was held in Anacortes to celebrate…Madelyn is cancer free!!! Read … Continue reading →

What is Anacortes Magazine About?

Our vision with Anacortes Magazine is to bring people together in a special way through the creative arts, including music, art and photography. I love to help people tell their stories. When they have a chance to share what’s in … Continue reading →

As we grow older, many of us shut ourselves off to true friendships, hiding within ourselves the best gift we have to offer. With this in mind, the Fidalgo Island Writers Guild asked the children of Anacortes to share with all of us what makes a person a good friend through the eyes of their youthful hearts. More than one hundred children responded… Continue reading →